This post is supposed to collect solutions and implementations that are necessary to introduce new players to DDNet. The introduction is intended to help people who never played teeworlds before. The tutorial should be designed in a way that allows players with other clients to play it but is mainly dedicated to people who start with the DDNet client. With a finished introduction we could think about going on steam.

This is about what we need to introduce newbies to DDNet. I divided this into three parts but you can also suggest changes in the structure. I will add important goals here, feel free to discuss and suggest goals.

A1#1 timakro set a goal and wrote:The default settings and binds should be set from the beginning to allow seriously playing harder maps later. Note that some default bindings are really weired at the moment (at least thats what I think). Jumping is bound to the up key for example.

B1#1 timakro set a goal and wrote:It explains for complete newbies how to use the DDNet client and play the game. It begins when the client is started and explains how to join DDNet servers yourself in the future. Everything should look nice and be entertaining, it should not expect too much from new players.

C1#1 timakro set a goal and wrote:I played DDrace with complete newbies and realized that they could hardly do any novice part. I think that nearly every DDrace player started with a different gametype that is easier to do. In DM for example you don't need to hook precise enough to catch a tee. You can just concentrate on hitting other players with your gun at the beginning. To keep players after the tutorial we would need a set of extremely easy maps that build upon the tutorial.

This is about saving possible solutions, I will add new solutions here, feel free to suggest and discuss different solutions.

A2#1 timakro suggested a possible solution and wrote:I think the best thing would be to find out how most of the advanced players configured there client. Ideas could be taken from here too viewtopic.php?f=16&t=2537.

A2#2 dinner suggested a possible solution and wrote:dyncam should be off by default. Having it on makes learning the game much more frustrating imo

B2#1 timakro suggested a possible solution and wrote:When the player starts the client he is guided to a DDNet-like server to join. When he joins the server he can see his character and the first instructions on the screen (something like press A and D to walk). He plays a well designed map which looks nice and is incredible easy to play with his dummy to learn the basics of movement. Simultaneously he is taught how to use the DDNet client (for example the server browser, clear entities and dummy).

B2#2 Ryozuki suggested a possible solution and wrote:Maybe you should make newbs clear that DDRace is a hard mod, if tutorial is too easy, they could get depressed by how difficult a novice 3 can be for them.
Maybe in the tutorial you should tell them explicitly to play novice 1 maps and do some recommendations. (Easiest maps actually)
Made this long time ago

C2#1 timakro suggested a possible solution and wrote:We can't cover the entire DDrace features like doors, draggers, etc. in the tutorial at the beginning anyways since it would be to much for the new players and bore them. I think those maps should rather be played with real partners instead of dummies since that is more fun and they can figure out how stuff like doors and draggers work together, the maps could still contain short explanations. Although the maps have to be really easy and so can't be integrated in the current point system.

This is about finished inplementations. I will add what's finished here, feel free to discuss and implement solutions.

A3#1 timakro implemented a solution and wrote:I disabled dyncam by default, enabled the server compatibility filter by default and set auto switch weapon to 1 by default

B3a#1 timakro implemented a solution and wrote:I already started coding a little bit here, I didn't work at the tutorial itself at all though because I was surprised when I tried playing DDrace with complete newbies by how hard it is for them. You can find the source here: https://github.com/timakro/ddnet/tree/tutorial_client would be merged with the ddnet master branch, https://github.com/timakro/ddnet/tree/tutorial would stay in a separate branch just for the tutorial servers
When a new player starts the client he sees the following screens in order:
SpoilerShow 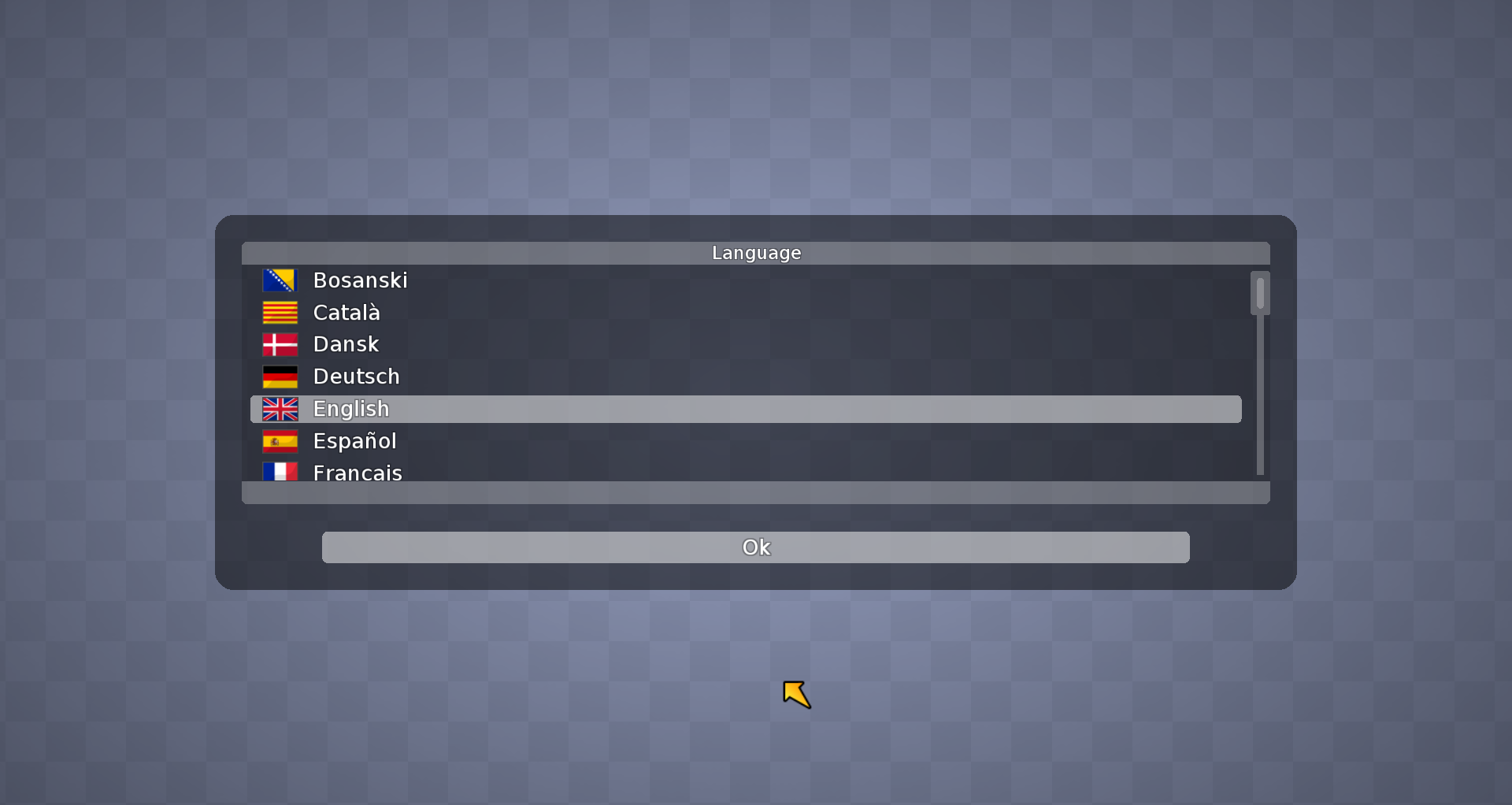 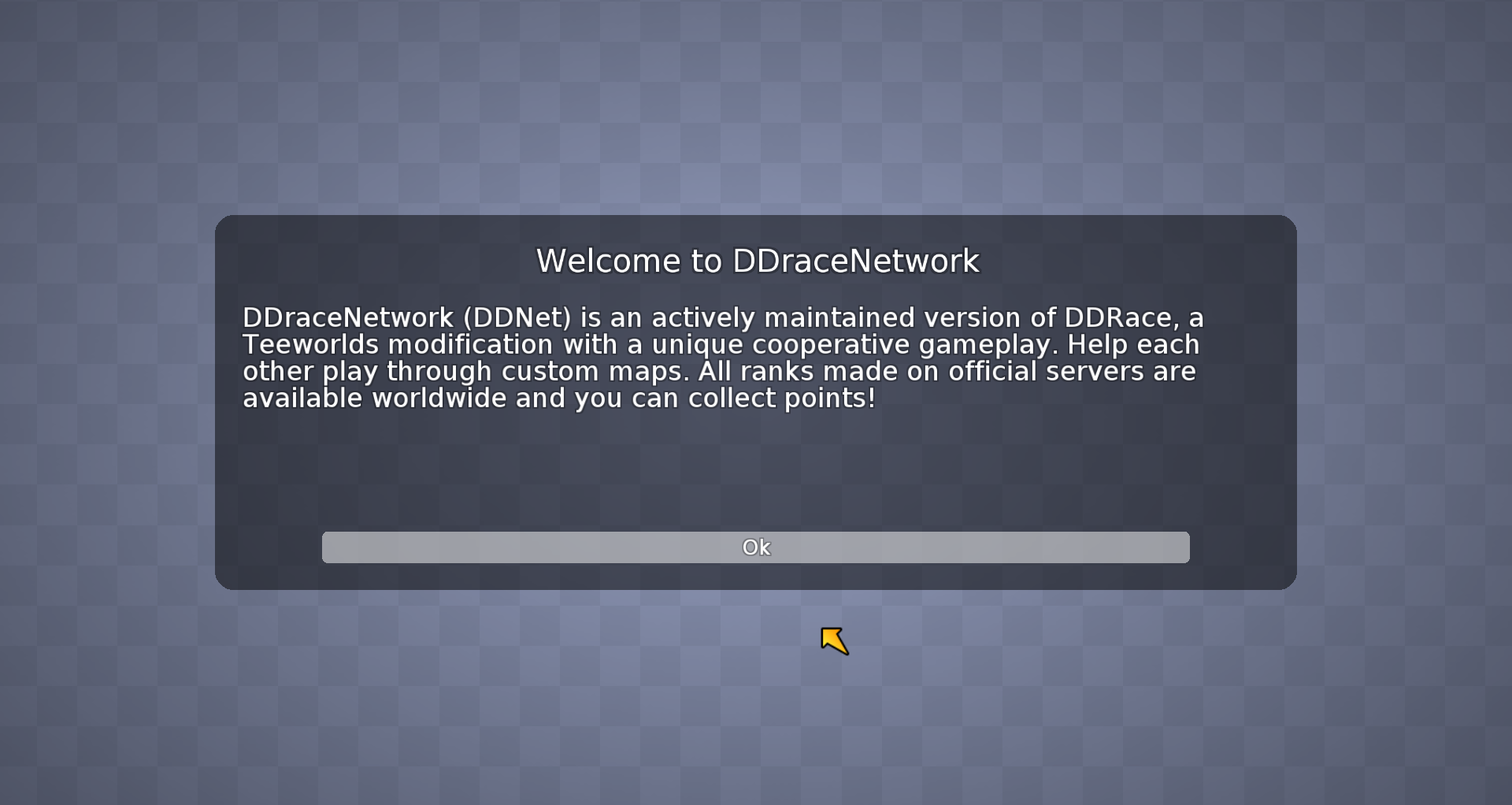 Before you enter a name you just can't click enter. 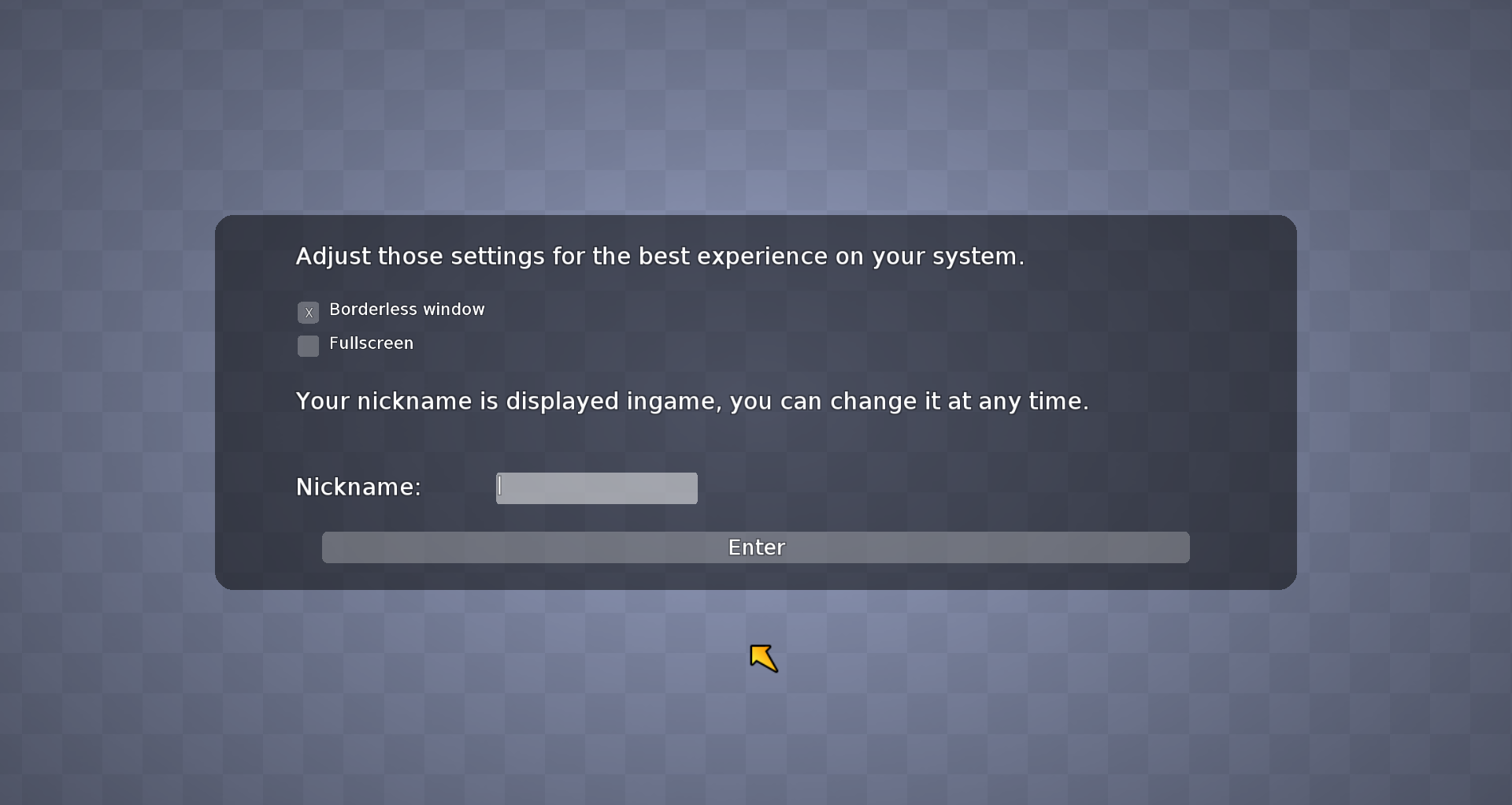 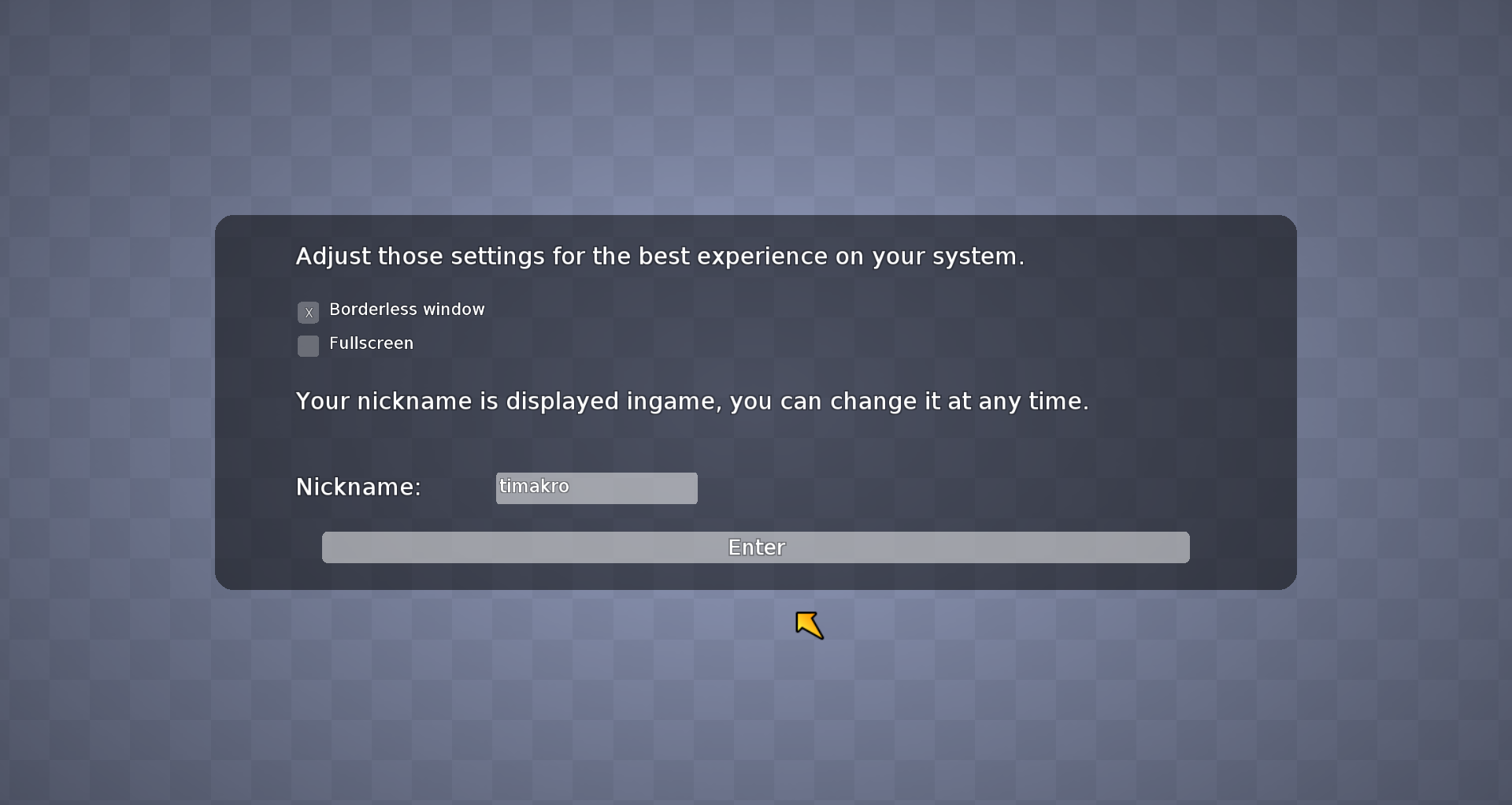 If tutorial servers are online they can be seen and joined here. On the server the player is asked to choose a language, the ddnet client will automatically try to choose the language selected at the beginning. You can list the available languages and choose one if your language is not supported yet. In the tutorial map are tiles which show texts in the selected language. The tune layer is used for the new tile, the zone for the id of the message. The messages are stored for every language in a text file. When connecting a dummy he always joins in your own team next to you.

Please tell us your own ideas and opinions and feel free to help wherever you want.
Last edited by timakro on Wed Jun 08, 2016 6:27 pm, edited 8 times in total.
Top

dyncam should be off by default. Having it on makes learning the game much more frustrating imo
Top

Maybe you should make newbs clear that DDRace is a hard mod, if tutorial is too easy, they could get depressed by how difficult a novice 3 can be for them.
Maybe in the tutorial you should tell them explicitly to play novice 1 maps and do some recommendations. (Easiest maps actually)

Made this long time ago

Maybe write: "Select a Tutorial-Server with a low ping"
So they dont think they are already in the real server list
reply to this post or your mom will die in her sleep tonight
Top

(About A)
I agree that the default bindings aren't really good and could be improved. Even though with some experience a player should make his own set.
(About B and C)
If we want to think about how new people join the game, we firstly need to think about the following 2 things:

DDrace is small...the community is small, the number of people joining is equivalent. A tutorial wouldn't be played by many people, easy maps wouldn't keep anyone playing. Teaching them to play with their dummy while they can't even handle their own tee would result in even more dummys in team 0. There isn't a way a Tutorial would have any bigger posivitve effect.
.hi._.leute._.gll. | iMTGmember
Top

dinner wrote:dyncam should be off by default. Having it on makes learning the game much more frustrating imo

Im 'corneum wrote:Maybe write: "Select a Tutorial-Server with a low ping"
So they dont think they are already in the real server list

I don't think this is necessary, the server names will contain the word "tutorial".
Top

Ryozuki wrote:Maybe you should make newbs clear that DDRace is a hard mod, if tutorial is too easy, they could get depressed by how difficult a novice 3 can be for them.
Maybe in the tutorial you should tell them explicitly to play novice 1 maps and do some recommendations. (Easiest maps actually)

Made this long time ago

Added to ideas, nice tutorial, I'd like to see something like this in the tutorial too.
Top

@hi_leute_gll
When reading your post I realized that there are other kinds of new players I didn't think about and I don't want to help with this post. This was unclear before so I added the main goals of this topic at the beginning of my post: To make it short the tutorial is supposed to help completely new players who never played teeworlds before, e.g. possibly people from steam in the future. I know that this is a hard task.
Top

Haha, when you release this on Steam a tutorial will be your smallest problem. The release of Vanilla showed us clearly how easily it is to destroy a whole community with this step.^^

Users browsing this forum: No registered users and 0 guests